Natural oils are generally triglycerides, ie ester derived from glycerol and three fatty acids. Triglycerides are the main constituents of body fat in humans and other animals, as well as vegetable fat. They have a very good compatibility with human skin.

Naturally occuring triglycerides are generally unsaturated, ie one or several Carbon / Carbon bonds are double bonds. For example, the triglycerides of the olive oil are made of two radicals of oleic acid and one of palmitic acid attached to glycerol. Oleic acid has one Carbon/Carbon double bond.

Below, an example of triglyceride with double bonds on the fatty chaines.

These double bonds are sensitive to oxidation, which turns natural triglycerides rancid. As a consequence, the use of natural triglycerides in cosmetic needs to be balanced with their tendancy to turn rancid, with a typical malodor associated. The solution is often to add anti-oxidants to cosmetic formulations with natural fats, to prevent oxidation and rancid odor.

Another option, to keep the benefits of natural oils (skin feel, emolliency), without the drawback of oxidation, is to go with Caprylic/Capric Triglyceride. This ingredient is a synthetic triglyceride from natural origin (generally Coconut and Palm). This means that the fatty chains and glycerine can be from natural origin, and a chemical reaction is made (esterification) to synthesize the triglyceride. The fatty chains come from Caprylic Acid and Capric Acid, both saturated (ie without double bonds), so resistant to oxidation. 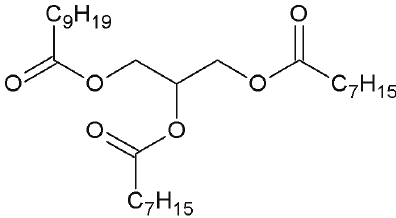 Croda is one of the suppliers of Caprylic/Capric Triglyceride, under the tradename Crodamol GTCC. It is described as a “fully saturated emollient triester, recommended as an alternative for mineral or vegetable oils in a wide variety of personal care and pharmaceutical applications. Fully saturated triglyceride. Light emollient with good lubricity. Excellent solvent for chemical sunscreens and wetting agent for physical sunscreens.”