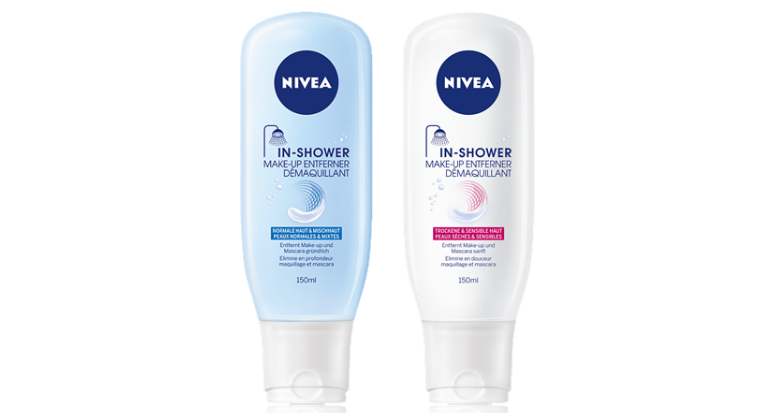 Following the success of the In-Shower Body Lotions, Nivea extends the concept to face care, with 2 new In-Shower Make-up Removers. 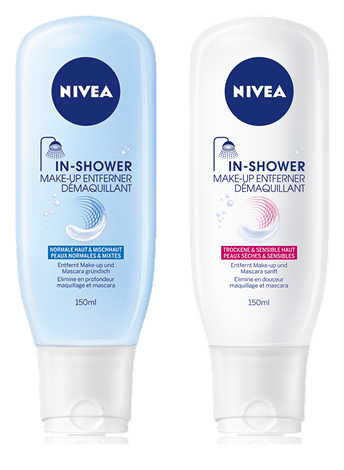 Nivea has cascaded the idea of the the In-Shower body lotions to face care. Technically, the two formulas are similar to classical make-up cleansing milks, and could be use as classical cleansing milk with cotton pad. The innovation comes actually from the recommended mode of use, in shower, applied on dry skin with fingers, and rinsed with water. Compared to foaming cleansing gels, these two formulas can be used safely on eyes (no irritating foaming surfactants) and does not dry out skin (no delipiding effect thanks to an emulsion base). The idea is very good and new to the market.

The two formulas are claimed to remove make-up and mascara without cotton pad, in shower, leaving a soft skin. The formula is recommended to be used on dry skin, massaged and rinsed away with water.

Both variants (Dry Skin & Normal Skin) are emulsions, based on the same system : Polyglyceryl-3 Methylglucose Distearate (Evonik’s TegoCare 450) as surfactant, with Cetearyl Alcohol as co-emulsifier, thickened and stabilized with 2 polymers : Sodium Polyacrylate (like BASF’s Cosmedia SP) and Xanthan Gum.

Both variants contain Glyceryl Glucoside, a moisturizing agent trademarked by Nivea as Hydra IQ, but not specifically claimed on pack. It was launched several years ago, and claimed on moisturizing face care (Aqua Sensation range) and body lotions. Glyceryl Glucoside is claimed by Nivea “to be proven in-vitro to activate the formation in skin of new aquaporins, water channels which allow water molecules to travel in and out of skin cells. The tissues ability to retain water is thus improved resulting in a better, long-lasting moisturisation of cells.”

Nivea made a video to explain the concept of Hydra IQ :

The Normal to Combination Skin variant contains Phenoxyethanol, and Piroctone Olamine, also known as Octopirox, an anti-fungal agent used here as an preservative.