Nivea is launching this December 2012 a new formula in its Nivea Q10 Plus range : Energy Day Care / Crème d’Energie SPF 15.

The new Q10 Plus Energy Care is an extension of the Q10 range aiming to conquere a larger audience, starting to 30 vs 40 for the two other main care of the range (the “Classic” and the “Light” textures). It is indeed claimed to be “your first Q10”. It is also broadening the types of skin targeted by the Q10 Plus range : the Classic formula is positionned as a “dry skin” formula, the Light texture targets the oily skins, and the new Energy Care the dull and tired skins. 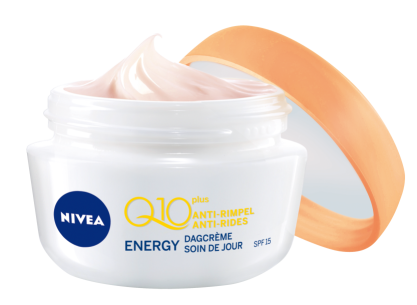 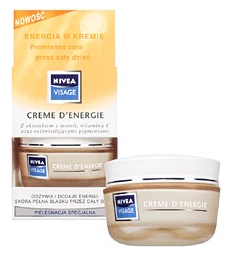 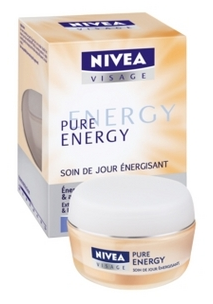 This product was out of any other range of the Nivea Visage, and the concept was an energizing radiance boosting moisturizer, containing an apricot extract and optical reflectors (pearls).

Apart from the concept, the new Q10 Energy Care formula is the very best of the basic technologies used by Nivea in its face care emulsions (Glyceryl Stearate Citrate / Chondrus Crispus / Carbomer / Pemulen), with an oil phase intermediate between the “light” and the “classic” Q10 Plus creams. The only real technical point of difference is the Goji extract added to the formula, without any real added value except its marketing aspects.

As a member of the “Q10 Plus” family, this formula contains the three active ingredients of the range : Ubiquinone (Coenzyme Q10), Creatine, 1-Methylhydantoin-2-Imide (Creatinine).

The ingredient specific to this new formula is the extract of Goji berry (INCI name : Lycium Barbarum Fruit Extract), claimed to be an “antioxidant fruit widely used in traditional Chinese medicine”.

The major claim of this new formula is to “give a skin refreshed, radiant and fresh as after a good night’s sleep”. More precisely, it is claimed to prevent and visibly reduce early wrinkles, to awaken the radiance of skin and to reduce signs of fatigue. It is aiming working women and young mothers from 30.

O/W Emulsion based on Glyceryl Stearate Citrate as surfactant and Cetearyl Alcohol as co-surfactant. The formula is thickened and stabilized with several polymers : Chondrus Crispus Extract, Carbomer and Acrylates/C10-30 Alkyl Acrylate Crosspolymer.

Additionnally to the lipophilic UV filters, the oil phase of the formula is made of Cyclomethicone, C12-15 Alkyl Benzoate and Hydrogenated Coco-Glycerides.

The formula is protected against microbiological growth by Phenoxyethanol, Methylparaben, Ethylparaben, helped with Trisodium EDTA, Ethylhexylglycerin and Methylpropanediol.