Clinique is launching this March 2012 two new products under the Even Better range.

These two products dedicated to skin tone and dark spots are : 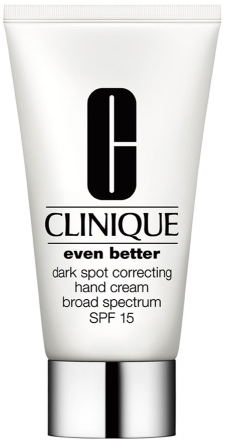 The SPF20 Lotion (technical study available below) is the “light” version of the SPF20 Cream already on the market. It is dedicated to combination oily to oily skins. It is based on a quite modern technology associating classical surfactants (Croda Arlacel 165 (PEG-100 Stearate (and) Glyceryl Stearate) / Croda Brij 721 (Steareth-21)) to a silicone derivative surfactant (Shin Etsu’s KF-6038 (Lauryl PEG-9 Polydimethylsiloxyethyl Dimethicone)), thickened with Clariant Aristoflex AVC (Ammonium Acryloyldimethyltaurate/VP Copolymer).

The product is an oil-free anti-dark spot treatment with “specialized ingredients” to “break apart surface darkening and exfoliate for a more-even complexion and prevent future damage with high-level UVA/UVB defense”. And indeed, the formula is built around three families of ingredients helpful in treating and preventing dark spots :

A Dark Spot Correcting Hand Cream SPF 15 is also launched. The Even Better range hence targets all the visible parts of the body where dark spot appear.

– Ascorbyl Glucoside : Hayashibara AA2G™, claimed to be a stable version of Vitamin C (ascorbic acid) with glucose, also named Vitamin Cg. It is slowly released in skin under the action of alpha-glucosidase, an enzyme of the skin that breaks the link between ascorbic acid and glucose parts of the AA2G molecule. It has the properties of Vitamin C in terms of cosmetic activity : skin brightening, promotion of collagen synthesis increasing the suppleness of the skin, sunlight protection as free radical scavenger and wrinkles and fine lines reduction. The benefits vs Ascorbic Acid are its high stability, its prolonged action in skin throuhg a slow release and its higher solubility  and wider range of pH condition for an easier formulation.

– Laminaria Saccharina Extract : could correspond to Biotech Marine Phlorogine. As described in this patent, “Phlorogine is known as anti-seborrhoeic agent that can regulate the activity of sebaceous glands”

– Trametes Versicolor Extract : Estée Lauder (mother company of Clinique) owns a patent on this active ingredient : “Compositions And Methods For Treating Skin With Extract From Trametes”. Trametes extract is claimed to “whiten skin, treat skin for improvement, or treat skin disorders associated with pigmentation such as uneven pigmentation, skin mottling, or age spots or other dermatological disorders such as eczema, rosacea, hyperkeratinization“.

– Scutellaria Baicalensis Root Extract : extract of Chinese skullcap Scutellaria baicalensis, it is sold among others by M.M.P. Inc. under the tradename Baicalin MM, claimed to have antioxidant, antiinflammatory, antiallergic, antimicrobial / antifungal properties (against Candida albicans and Pityrosporum ovale), tyrosinase inhibition (skin whitening) and antiproliferative properties. Regarding the concept of the product, this active is certainly used for its tyrosinase inhibition properties.

– Punica Granatum (Pomegranate) Fruit Juice : already seen in Clinique Laser Focus Wrinkle & UV Damage Corrector, it was suspected to be the Pomegranate Juice Extract E40 supplied by MMP, a dry extract titrated in Ellagic Acid and claimed by MMP to be “an efficient DNA protector”. It has been shown that an ellagic-acid rich pomegranate extract has an inhibitory effect on tyrosinase activity and UV-induced pigmentation.

– Salicylic Acid : known for its keratolytic and anti-bacterial properties.

– Caffeine : said to enhance the appearance of dry or damaged skin by reducing flaking and restoring suppleness

– Linoleic Acid : straight chain unsaturated omega-6 fatty acid, it would have anti-inflammatory, acne reductive, and moisture retentive properties when applied topically. Moreover, it would be effective in cell regulation and skin-barrier repair, as well as an antioxidant.

– Acetyl Glucosamine : it has been patented by Estée Lauder in 1999 as an exfoliating agent.

– Dipotassium Glycyrrhizate : according to CosmeticInfo.org, it is a salt of Glycyrrhetinic Acid isolated from licorice plants used to enhance the appearance of dry or damaged skin by reducing flaking and restoring suppleness. According to this publication, licorice extract would have inhibitory effect on tyrosinase (i.e. whitening properties)

– Sodium Hyaluronate : it is a polysaccharide naturally found in the body, functionning as a tissue lubricant. It is the salt form of Hyaluronic Acid. It is often used as a moisturizer due to its capacity to hold water. As a polymer, it also participate to the texture of the formula, making it more slippery.

– Trehalose : Hayashibara is one of the suppliers of Trehalose. It claims that it “protects skin fibroblasts from dehydration because it replaces water in tissues helping to retain the natural structure of skin and hair. Thus it can be used as an effective moisturiser affording protection from potentially damaging climatic conditions. This is because trehalose replaces water in tissue and reduces the damage from dryness, heat and cold – retaining the natural structure of the skin and hair.”

The formula is protected against microbiological growth by Phenoxyethanol, helped with Caprylyl Glycol, Disodium EDTA, and other polyols listed above that help to decrease water activity in the formula.