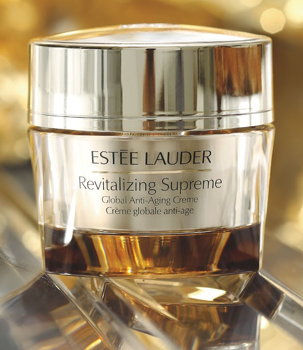 First, this formula is claimed to be specifically designed to answer the needs of European women, identified as “cultured, pragmatic, upper middle class, with active life and one desire : to simplify their everyday beauty routine”. The formula thus offers a “global anti-aging action”, claiming to “visibly reduce the multiple signs of aging” : wrinkles and fine lines, density, lack of glow and dehydration. A clear tag of this european oriented product is the total lack of UV filters in the formula. Indeed, as a US-native brand, Estée Lauder used to develop its formulas with US habits : for american women, an anti-aging cream necessarily includes UV protection, since UV are considered as the main cause of aging. The european way is different, and UV filters are not mandatory for european customers.

The apparent simplicity of the product is also new for Estée Lauder, usually very prone to go into detailed biological mechanisms of skin, with a profusion of active ingredients. In this product, “simplicity” is a claim :

– the concept is simple, helped with a strong emphasis on the “new discoveries in genetic aging” and the “12 international patents” protecting the product. No more details

– the benefits are simple yet strong : global anti-aging, global action, sensoriality and pleasure

– the formulation approach is simplier than usual for an Estée Lauder product : the formula is built around a unique surfactant system (Nikko Chemicals Nikkomulese WO-CF), and the number of active ingredients used is limited regarding previous launches. Moreover, most of them have already been used in other products of the Estée Lauder brands. Simplier, yet innovative, since the surfactant system used produces a W/O emulsion with very interesting properties, while the usual technology used in skincare is the O/W emulsion.

This product is thus very interesting, as much for the new technologies used in formulation and active ingredients as for the new “simple” and “global” approach for developing a product in the Estée Lauder brand. This new approach surprisingly corresponds to the departure of its emblematic R&D head (Senior Vice President of Global Research and Development for Estée Lauder), Daniel Maes, who strongly inspired the launches of the Estée Lauder group. Nadine Pernodet (Estée Lauder Companies Executive Director Global Research & Development-Biology) seems to take over his communication role, as one of his close assistants. It will be very interesting to look at the future launch of Lauder Group with this new generation of scientist.

The Estée Lauder Revitalizing Supreme Cream is presented as a global anti-aging product, acting on the multiple signs of aging. For such a concept, Estée Lauder found a global biological pathway : the Nrf2 transcription factor, claimed as a “master switch” that can activate the multiple anti-aging defense of the skin. No patent from Estée Lauder seems already available on this technology, but in the past, studies have linked Nrf2 to aging (Genomics analysis of the reduced antioxidant capacity of aging skin by P&G). The Black Bamboo extract, base of the IntuiGen technology, is claimed to activate this Nrf2 switch.

The product is also claimed to include the SIRT-1 Technology, claimed to give skin extra time for self reparation. This could done through the IRB-Dormin active (Narcissus Tazetta Bulb Extract) detailed below.

More details on the active ingredients are given below :

– Phyllostachys Nigra (Bamboo) Leaf Extract or Black Bamboo Extract : according to the Personal Care Product Counsil Buyer’s Guide, this ingredient is very probably supplied by Access Business Group to Estée Lauder, and would correspond to the main ingredient of the “IntuiGen” technology.

– Propylene Glycol Dicaprate (and) Helianthus Annuus (Sunflower) Seed Cake (and) Hordeum Vulgare (Barley) Extract (and) Cucumis Sativus (Cucumber) Fruit Extract : sold under the name Phytofix by Barnet, it is said to be a “blend containing soluble sphingolipids, triglycerides and sterols to mimic the structure of the skin’s lipidic membrane”, claimed to “improve skin condition, reduce in the appearance of lines and wrinkles, reduce flakiness, moisturize and improve skin clarity”.

– Narcissus Tazetta Bulb Extract : very probably corresponding to IRB-Dormin by IRB. It is “a natural aqueous extract from Nacissus bulbs in their dormant stage”, and claimed to be able to “slow cell proliferation in a reversible and general manner”. For its Dormin range, IRB claims that “slowing cell proliferation prolongs the life span of epidermis and provides the means for complete epidermal maturation. Matured, properly differentiated cells have a better ability to protect inner cell parts from environmental aggressions, such as UV irradiation and xenobiotics, resulting in a enhanced skin aging process”.

– Caffeine : said to enhance the appearance of dry or damaged skin by reducing flaking and restoring suppleness

– Ergothioneine : already seen on CosmetoScope in Clinique Laser Focus Wrinkle & UV Damage Corrector, Estée Lauder Resilience Lift Firming/Sculpting Collection, Clinique Repairwear Uplifting Firming Cream and Algenist, it has been brought to Lauder by AGI Dermatics, and supplied by Barnet under the trade name Thiotaine, it is claimed to have a role in skin energy production and fatty acid transport, to be an anti-oxidant, especially protector of mitochondria, to be an “anti-stress” molecule, and to have skin clarifying properties. Lauder and AGI own two patents on this ingredient : US20100197750 (Preservation Of Ergothioneine), and the patent linked to the Clinique Laser Focus formula : US6479533 (Methods and compositions for the protection of mitochondria).