L’Oréal Paris is (finally) launching a men grooming range dedicated to beard under its skincare range for men “Men Expert”.

“Finally”, because wearing beard is such a huge trend in men fashion, at least in Western Europe, that it is surprising that L’Oréal have not done it before…

Transversally to the range, L’Oreal claims “no silicone, no dyes, no ingredient from animal origin”, and supports the Movember foundation for men’s health.

The range is build around 3 steps, and 4 formulas, all designed to help men to take care of their beards. The technologies behind are known, with some transfer from the hair category (conditioning agents, caring oil).

The formula is a pearly (Glycol Distearate as pearlizing agent) foaming gel built on Sodium Laureth Sulfate and Covo-Betaine. It contains a quaternary guar (Guar Hydroxypropyltrimonium Chloride), a conditioning agent, positioned in the first ingredients of the ingredient list. This ingredient helps to support the claims “softens beard” and “detangle hair”. The formula also contains Menthol,  ingredient providing a cool sensation on skin.

The formula is an anhydrous oil made mainly of 3 liquid oils : Isopropyl Palmitate (a light fatty ester), Caprylic/Capric Triglyceride (a synthetic triglyceride, with the same feel as natural oil while not being sensitive to oxidation) and Polybutene (synthetic apolar hydrocarbon compound).

This formula is contains Croda Cithrol DPHS as main surfactant (PEG-30 Dipolyhydroxystearate). Cithrol DPHS is supposed to help to make W/O emulsions. But the formula does not contain an oil phase. It looks rather like a gel where the stabilizing/thickening polymer is Acrylate/C10-30 Alkyl Acrylate Crosspolymer (e.g. Pemulen), with several ingredients added for feel and touch : Bis-PEG-18 Methyl Ether Dimethyl Silane (a water-soluble silicone wax), sodium hyaluronate.

– Step 3 : Give Style with a Styling Cream Hair & Beard 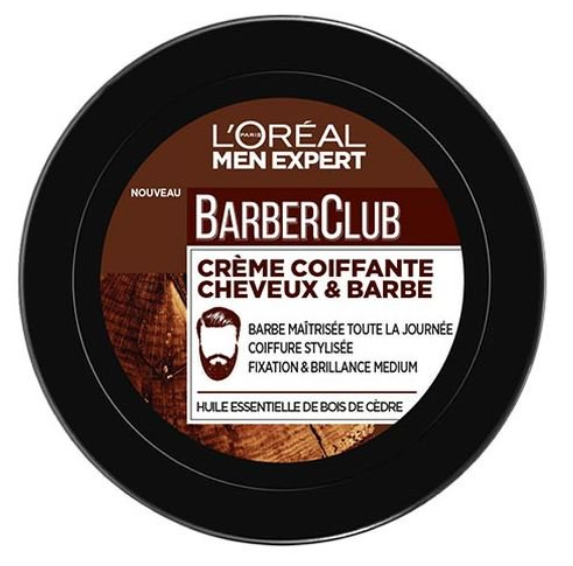 The formula is an emulsion with Croda Arlacel 165 (PEG-100 Stearate (and) Glyceryl Stearate) as emulsifiers, Cetearyl Alcohol as co-emulsifier, and Dow’s Aculyn 44 (PEG-150/Decyl Alcohol/SMDI Copolymer). The oil phase is made of Mineral Oil, Microcristalline Wax and Phenyl Trimethicone. The formula contains VP/Dimethylaminoethylmethacrylate Copolymer (e.g. Ashland Copolymer 968) as hair grooming and conditioning.