For its 140th anniversary, Shiseido unveils for a limited-time the Original 1897 Edition of its cult formula Eudermine Revitalizing Essence.

It is a good occasion for us to introduce a new category of article in CosmetoScope dedicated to skincare cult products, those products that exist for many years, loved by their consumers, still successful whatever the trends.

So today we have closer look to Shiseido Eudermine. 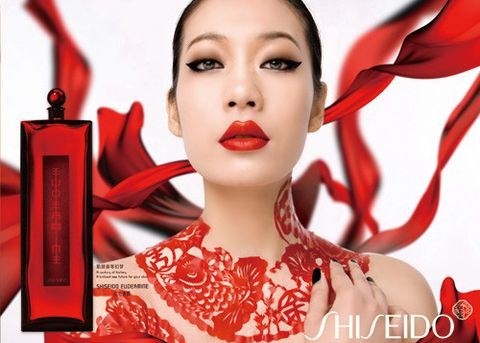 The History of Shiseido’s Eudermine

According to various sources detailed at the end of this article, Eudermine was first sold in 1897, and is still on the market, evolving with scientific advances. Its initial formula was developed based on the research made by Dr. Nagayoshi Nagai from the Imperial University of Tokyo. It was the first move of Shiseido from pharmaceuticals to cosmetics area, applying scientific production methods of drugs to the design and the creation of superior quality cosmetics.

It was also a marketing innovation for Japanese cosmetic product :

– the name of the product – Eudermine – was not Japanese, but derived from two Greek words : eu meaning good, and derma meaning skin

– the formulation itself was more in a Western-style, colored in ruby-red.

All these new features made Eudermine nicknamed the “Shiseido’s Red Water”.

Shiseido’s Eudermine Revitalizing Essence is basically a texturized lotion, claimed to “delivers immediate moisture and improves your skin’s own moisturizing power. The result is supple, smooth skin. Responds to changes in climate to keep the skin’s moisture level constant regardless of location or time of year. Recommended for all skin types. Use morning and night after cleanser.”

In a Japanese beauty routine, this product would be called a “cosmetic water”, the first step of the routine bringing moisturization and hydration to the skin, followed usually by a “milky lotion” that would “lock” water into the skin. Cosmetic waters have a specific feel once applied on skin, fresh and slightly sticky, corresponding to a moisturized skin feel in Japanese women mind.

Eudermine has experience several evolution for its packaging. For its 100th century, Eudermine has repacked in a new bottle design by French design Serge Lutens.

This formula is a classical cosmetic water, associating water, alcohol, polymers, glycols and humectants to obtain a state-to-the-art japanese toner. It has been marketed as a Revitalizing Essence for a global launch. Contrary to how Western people use a toner (usually the next step following cleansing), toners named “cosmetic waters” in Japan are skincare products bringing a benefit to the skin, as much as a cream or a lotion. It is not an easy product to comprehend and position in Western countries, but its “cult” status make it viable on the market out of Japan.

The formula contains a lot of glycols, typical of cosmetic water textures, causing a slightly sticky finish on skin, interpreted as a moisturizing efficiency : Butylene Glycol, Glycerin, Dipropylene Glycol. These glycols are associated to Methyl Gluceth-10 sold by Lubrizol under the name Glucam E-10 Humectant, and claimed to “bring moisture to the skin while reducing the tacky feel normally associated with the ingredients tipically used in moisturizing creams.”

The formula contains a fragrance, solubilized in this aqueous formulation with PEG-60 Hydrogenated Castor Oil solubilizer and Cyclodextrin.

The formula is protected against microbiological growth by Alcohol Denat., Methylparaben and Phenoxyethanol. The formula contains a buffer salt, Sodium Hexametaphosphate.

Apart from the glycols mentionned above which participate to moisturization properties of the formula, it also contains :

– Betaine : used in biology to favor water retention in cells, thus protecting from the effects of dehydration

– Arginine HCl : amino-acid known for playing an important role in cell division, the healing of wounds, removing ammonia from the body, immune function, and the release of hormones.