Lancôme is about to launch a new global anti-aging cream under its Absolue franchise : Absolue L’Extrait.

Absolue L’Extrait is a new ultra-luxe global anti-aging cream, which will retail in Europe for 320 € ($350 in the US), and be launched between April and September worldwide. 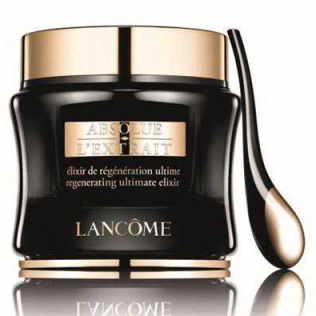 The concept is built around a star ingredient, rose stem cells, said to be extracted from the Lancôme Rose, a specie specifically created for Lancôme in 1973, resisting various environmental agressions (cold, insects…). The biotechnological process used to extract those stem cells is named “Fermogenesis”, without much more details available at this time on this process. This active ingredient is claimed to be capable of “stimulating human dermal stem cells”.  Each 50 mL jar of formula is claimed to contain “2 millions rose stem cells”.

Apart from the rose stem cells, the formula will also contain Proxylane, a proprietary anti-aging active ingredient of L’Oréal (owner of the Lancôme brand).

The jar design is an update of the Lancôme Nutrix jar initially designed in 1936 by Armand Petitjean, the founder of Lancôme.

The jar is sold with a massage tool – the “massage petal applicator” – developed with the Lancôme Institut. It is claimed to alternate hot and cold effect for stimulating the skin to invigorate it, activating microcirculation and promoting a better penetration of the formula’s active ingredients.

The formula has been tested on 42 women, half of them having sensitive skin. Results were observed after 11 weeks. This is quite unusual, since most of skincare products are tested on a 4 week basis. This is a trick to obtain better results to claim (the longer you use a product, the better are the results). As a global anti-aging formula, it is claimed to have a significant efficiency on the “seven major signs of aging” said by Lancôme to be :

– wrinkles around the mouth

Moreover, a 36% reduction in lines over the cheeks, and a 45% decrease in pigmentation in the lower face is claimed.

The rose stem cells are really the right active ingredient  for this product. Its story completely fits with the brand, with an image of high technology, exclusivity and efficiency. It is such the star ingredient that it would almost be the star alone, the formula being even behind. To reinforce the will of Lancôme to make this product a myth, even the jar has a story. R&D and Marketing teams have done their job to launch, like other luxury brands, a super-luxe global anti-aging formula.