A new formula is added in July 2011 to the Olay Regenerist range : Regenerist Wrinkle Revolution Complex.

This new addition in the Olay Regenerist range is not such a “revolution” in terms of technology : the structure of the formula is quite classical, and the active ingredients and the “light-manipulating” ingredients are well known and already used in existing skincare products. However, it tries a new positioning for a skincare product : it clearly emphasizes the optical properties, even before the “biological” properties of the formula (“light-manipulation” before moisturization). It is clearly positionned as a skincare, not as a make-up, but in the recommended routine, it shall be used as a “step 3”, after the cleanser and the moisturizer, as a “moisturizer/primer”, a smart way to broaden an already broad skincare range.

The formula contains several active ingredients. Among them, 7 are claimed :

– Niacinamide : Vitamin B3, the classical active ingredient of Olay, present in almost every cream / serum of the P&G skincare brand.

– Palmitoyl Pentapeptide-4, named “Amino-acid” or “Pal-KTTKS”. It is a star ingredient of the Olay Regenerist range, for which the mother company of Olay, Procter & Gamble, has made a specific brochure detailing its properties. Pal-KTTKS stands for “Palmitoyl”, a fatty chain, attached to 5 amino-acids : Lysine-Threonine-Threonine-Lysine-Serine (Lysine is shorten “K”, Threonine is shorten “T” and Serine is shorten “S” in Biology).

However, it is now an exclusive ingredient of the P&G Company, thanks to another patent from P&G : in order to stop anyone from using Matrixyl, which P&G certainly found very interesting, it registered another patent in 2000. This one protects the use of Matrixyl with “a safe and effective amount of at least one additional skin care active selected from the group consisting of desquamatory actives, anti-acne actives, vitamin B3 compounds, retinoids, di-, tri-, and tetra- peptides and derivatives thereof, hydroxy acids, radical scavengers, chelators, anti-inflammatory agents, topical anesthetics, tanning actives, skin lightening agents, anti-cellulite agents, flavonoids, antimicrobial actives, skin healing agents, antifungal actives, farnesol, phytantriol, allantoin, glucosamine, and mixtures thereof” in “a dermatologically acceptable carrier“, that is to say : any composition associating Matrixyl with another active ingredient !!! That is tricky, but it is how companies use patents to protect their business ! P&G is thus the only one to be able to use Sederma’s Matrixyl !

But Sederma has not lost everything in this trick : first, it can still make money with its Palmitoyl Pentapeptide-4 since it can sell it to P&G, but only to P&G. Secondly, Sederma is the only owner of the “Matrixyl” tradename, and P&G cannot use it, unless Sederma gives its agreement. Maybe that is why P&G uses “Pal-KTTKS” in its communications. And thirdly, has a revenge, Sederma has developed a new Matrixyl, “Matrixyl 3000“, made this time of two peptides, better patent-protected then the first version, and this time available to everyone.

Presented as a “wrinkle treatment”, Olay Regenerist Wrinkle Revolution Complex formula is claimed to “hydrate to reduce the appearance of deep lines in just 14 days”

But in the communication on this new Regenerist formula, the emphasize is not put on these active ingredients, but on the “light-manipulating” powders and silicons it contains :

They are presented as “advanced micro-fillers and light-diffusing particles [that] smooth the look of fine lines”, and indeed, due to their physical properties, these ingredients have the ability to disperse and diffuse light. It is has if fine lines were blurred.

The combination of the active ingredients with the “light-manipulating” raw materials results in a formula claimed to “dramatically” reduced wrinkle appearence “after just 1 application”. 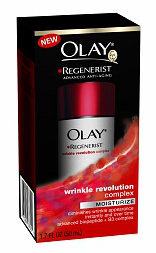 Ammonium Polyacrylate could be Covacryl VIP from LCW/Sensient, claimed to form clear gels with surfactants, and being compatible with alcohol.

Acrylamide/Sodium Acryloyldimethyltaurate Copolymer can be found in Seppic catalog under the tradename “Simulgel 600”. However, Simulgel 600 also contains Isohexadecane and Polysorbate 80. Indeed, it is a ready-to-use liquid polymer prepared as a W/O emulsion, that thickens when poured in the preparation during manufacturing. Put on the market by Seppic with Sepigel 305 (Polyacrylamide (and) C13-14 Isoparaffin (and) Laureth-7), this technology is a very convenient to formulate polymers, and has been now adopted by several other manufacturers. But here in the Olay formula, no Isohexadecane nor Polysorbate 80 is used. Two ingredients typical of Sepigel 305 (C13-14 Isoparaffin and Laureth-7) are present. One can suppose that they are associated with Acrylamide/Sodium Acryloyldimethyltaurate Copolymer as a raw material sold to cosmetic manufacturers.

The oil phase is made of silicones – Cyclopentasiloxane, Dimethicone.

The aqueous phase contains Glycerin and Propylene Glycol as humectants.

The formula is protected against microbiological growth by DMDM Hydantoin, an antimicrobial formaldehyde releaser preservative, and Iodopropynyl Butylcarbamate, helped with Disodium EDTA. The pH of the formula is corrected with Citric Acid.