Clarins is planning to extend its latest range, Capital Lumière / Vital Light, with a new Serum. 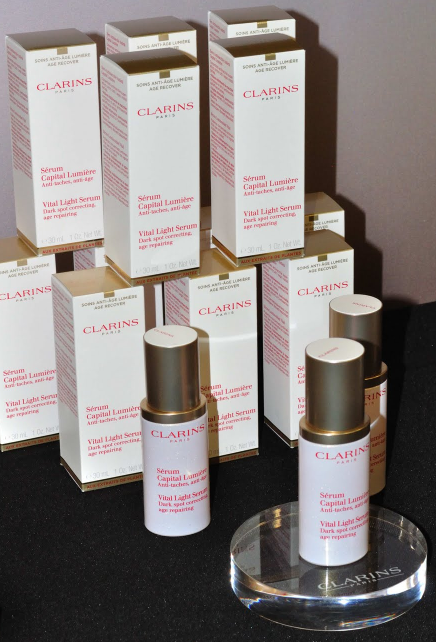 Clarins announced on past 3rd of May the launch of several new products. Among them, a new Serum is planned to be launched in October 2011 under the Capital Lumière / Vital Light range.

It is presented as a “highly concentrated anti-age serum that boosts the actions of Vital Light Day and Night while targeting two signs of ageing which are difficult to control: dark spots and a darkened complexion and diminished deep-sown luminosity”.

The formula is protected against microbiological growth with Phenoxyethanol and Sodium Benzoate.

– Hexylresorcinol : used for its anti-dark spot efficiency, it correspond to Synovea HR supplied by Sytheon. Hexylresorcinol is said to have skin lightening and skin protecting properties : it would be 4 times more effective as skin lightening than Hydroquinone, and would protect skin against sun-induced damage by stimulating production of Glutathione (an endogenous cell protectant) and antioxidant defense enzymes – Glutathione peroxidase.

– Spergularia extract (Spergularia Rubra Extract), claimed to reinforce Hexylresorcinol efficiency. This ingredient is already used in Capital Lumière / Vital Light Day, studied on CosmetoScope. It is an extract of Red sandspurry, originated from Marrocco and adapted to grow in sand. It is claimed to be exclusive to Clarins, and to have an anti-hyperpigmentation efficiency : it fights against pigmentary spots and unifies complexion.

– Cangzhu extract (Atractyloides Lancea Root Extract) claimed to activate cellular metabolism slowing with age, it is presented in Clarins Herbarium as having powerful lipolytic properties, acting in an intensive, targeted way, through the intermediary of G proteins, on the process of the release of fats.

– Cochlearia Officinalis Flower/Leaf/Stalk Extract : extract of Scurvy-grass, a plant adapted to life on the seashore, a environment rich in salt. This ingredient is claimed to be exclusive to Clarins, protected by a patent. Scurvy-grass is rich in Vitamin C, and is known to be antisceptic and fortifying. In the Clarins formula, it is claimed to have regenerating properties, to stimulate collagen production, to eliminate oxidized proteins, to inihibit glycation, and to delay cell senescence.

–  Tiliroside, a flavonoid present in Waltheria. It seems supplied by Merck / RonaCare, and have anti-oxidant, anti-inflammatory and anti-aging activities. In Vital Light / Capital Lumière, the Waltheria extract is claimed to be associated in a patented complex with a tripeptide. This tripeptide is the Palmitoyl Dipeptide-5 Diaminohydroxybutyrate present in the ingredient list. It is one of the two peptides of Pentapharm Syn-Tack. Palmitoyl Dipeptide-5 Diaminohydroxybutyrate participating to the efficiency of Syn-Tack, it can be considered as an anti-aging peptide. The patented complex Waltheria extract / Tiliroside and Palmitoyl Dipeptide-5 Diaminohydroxybutyrate is claimed to restructure the dermal network, to eliminate oxidized collagen and to stimulate collagen production.

Apart from this launch, three other launches were announced in skincare for Clarins :